I have always loved art, but not so much in a gallery, while I appreciate it, what really gets me happy is street art.

Street art is one of those things that you always have to appreciate.

I’m not saying all the ugly gang tags on the side of a bridge, but when you see something that someone has taken time to do, and invested more than just money into you have to stop and think about it.

Street art is an ever growing movement.

Street art came about because of graffiti, it is pointing out that graffiti is vandalism, but street art is to make a public space look better or to make a point.

In some cases art that has been done illegally has ultimately been accepted by the city.

It has been defined as, “all art on the street that is not graffiti.”

Street art is not confined to crappy spray paint on a wall to mark territory, it experiments with more than just spray paint. 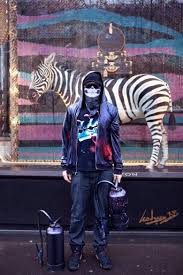 Like these pictures, a new movement called Laser Graffiti.

Artists such as the “Invader,” use Mosaic tiling to make little space creatures on walls.

Banksy and Shepard Fairey have revolutionized the use of stencils in the street art realm.

Shepard Fairey has created a major clothing company based off of what started as a few stencils and a famous face.

Obey clothing is by far one of my favorite clothing brands, and it was birthed out of the street art movement. 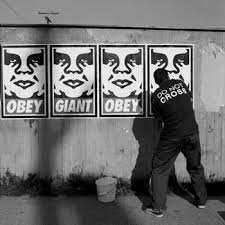 Who knew that going out in the middle of the night in Los Angeles would have made this man rich, and created one of the biggest names in the clothing world.

It started in 1989 in Rhode Island as a stickers that skaters would slap on poles and buildings featuring Andre the Giant, saying, “Andre the Giant Has a Posse.”

Much of this revolution can be seen in a documentary about one of the most well known artists, Banksy, called “Exit Through the Gift Shop.”

Banksy uses his art to point out flaws in society, and flaws in government, as well as just making cool pieces and displaying them for the world to see.

Banksy takes it beyond stencils (although his are amazing), but he, like some other artists, created permanent street installments, not just paint or tiles on a wall, but actual sculpture.

Like this one of a crumpled phone booth with a pickaxe in it, bleeding out on the ground.

The modern street artists of our days are trying to change how the old day’s “graffiti” looked.

Coming up with new and inventive way to express themselves is what it is all about.

Now, this is not to say that street art is legal and graffiti isn’t because the fact of the matter is, neither of them are legal, in the eyes of the law, no matter how good looking the piece is, it has not been sanctioned by law, therefore rendering it a crime.

Banksy has taken his satirical pieces global, stenciling on pictures of paradise on walls in Gaza, his art can be seen all over the world, he is truly not afraid to speak his mind, and so far has been successful in getting his point across, and not getting caught.

Nobody really knows who Banksy is and that’s how he wants it to stay.

In his documentary, he is always in a black hood, blacked out face, and altered voice to make sure his identity stays a secret.

With fame comes rumors, but in the times we live in, once it is online, it becomes the truth.

Shortly after the death of Osama Bin Laden, rumor that Banksy had tagged the Cristo Redentor in Brazil surfaced.

Somehow somebody came up with a story that Banksy flew to the Cristo Redentor in Brazil, and used spray paint to make the statue of Jesus look like Bin Laden with bullet holes.

Although talk is talk, this seemed like a move Banksy could make, I even believed it to be true.

As it turns out it was not, but this just goes to show what power the people have given these street artists.

For people to be able to believe a story this crazy must mean that these men and women are powerful and successful in their movement.

At some point I hope it can move passed some underground movement, and that cities actually pay these artists to beautify otherwise boring brick walls.

While making these movement legal, it might take some of the fun out of it for the artists, and for the viewers as well.

Having something underground brings a sort of naughtiness to it that makes it even more enjoyable for us to view, and the artists to do.

Knowing that it should not be there, makes the art mean even more, at least in my opinion.

Also a disclaimer, while I have experimented with stenciling at home, I have never committed any illegal acts involving art or any vandalism for that matter.

Keep your eyes open, you never know what you may see.