I love words. They are my sanctuary. I love writing stories with them and talking to people with them. Except I hate the words that carry bullets. The ones that once they leave the mouth, they leave a gaping wound. The one’s that leave nasty scars.

Depressed. Three times a week, I sit in an either too hot or too cold classroom. Mostly in the afternoon. This class is my English class and right now we’re reading Romeo and Juliet, a tragic tale of star-crossed lovers who take their lives. Except it’s not tragic, it’s pitiful. I personally feel bad for the hate the Montagues and Capulets have for each other. That book is just sad and to top it off, every class the word depression gets thrown around. That word pierces through my heart, every time it escapes the mouth of one of my oblivious classmates. Romeo and Juliet aren’t depressed, they’re in love. Depression is lying awake at three in the morning because you gave up telling yourself to go to sleep an hour ago. Depression is going to a movie or a concert and regretting getting out of bed. Depression is emotionally, and sometimes physically, demanding to the point where it ensnares you. Depression is not being able to cry because you just did three minutes ago. Depression is not to be uttered left and right.

Retarded. I sometimes sit in the library and my mind strays from the story in my hands and to the conversations behind me. I guarantee that nine out of ten times I hear someone say “You’re being so retarded right now!” However, that isn’t the case. The boy being called retarded is an able-bodied and able-minded person who maybe got a C on their last test because they fell asleep while studying the night before. That person didn’t fall asleep after crying for three straight hours because they got bullied at school again. That person doesn’t feel incapable of normality. That person isn’t looked at or treated differently than others. That person can wake up and walk through their day without a thought of hesitation. Being retarded isn’t a punchline. 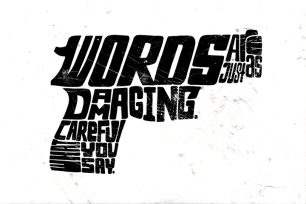 Words have meaning. The reason we’re trained to keep defining words is because we need to know how to use them. You
wouldn’t say someone’s eyes were ocean blue if they were actually brown. You wouldn’t say you’re happy when you’re sad. Some words take a while to master, but sometimes it needs to be mastered faster. So the next time you are at a loss for an appropriate word, pull out a dictionary instead of pulling the trigger.