A simple breath,
Take it in.
A glance sideways,
With a hidden grin.
A brush of hands,
A lifted heart,
Dreams can’t die,
Before they start.

You’re a nightmare,
Making my dreams come true.
You’re a fire,
So burn on through.
You’re the light in the tunnel,
But that might be the train.
You’re a stranger with open arms,
I’m glad you came.

It’s another life,
The one we lead.
Cherish it now,
Before it leaves.
With a brush of hands,
And a lifted heart.
Our dreams won’t die,
Though they may depart.

Lil’ Wayne released a track this past week titled, “I Hate Love,” that is, for a comeback, quite dark. I’m not sure if anyone remembers 2008’s mild musical disaster, Kanye West’s 808’s & Heartbreak, but when I heard this new style Weezy’s picked up, I immediately flashed on that. It’s dark, it’s passionate, and it’s auto tuned.

That’s really all there is to this track. Like 808’s, it’s very repetitive and not very catchy. Overall not a bad song, but when Lil’ Wayne is trying to come back from something like “Rebirth,” it’s gonna take more than just a song like this.

Lil’ Wayne is almost always upbeat and funny, so to see his music shift in this direction is quite a surprise. The only thing to do now is sit back and see how it pans out for the usually robust rapper and his up comeback album Carter IV.

Jack’s Movie Pick of the Week 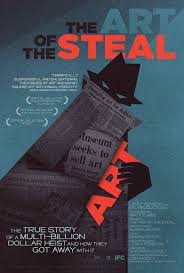 The documentary The Art of the Steal is the story of the struggle to control the late Albert C. Barnes’ priceless collection of post-impressionist art.

Albert Barnes was born into a poor Philadelphia family on January 2nd, 1872. He worked his way out of the slums by inventing Argyrol, a drug used to protect babies against venereal diseases.   The drug was mass marketed and Barnes made millions.

Around this time, a new type of art was starting to become popular.  This art was called post impressionism, or early modern art.  Popular artists in this field were Henri Rousseau, Van Gogh and Paul Cézanne to name a few.

Barnes noticed that this would eventually become famous and stocked up on as much of it as possible.

He started the Barnes Foundation as a place to educate people about the wonders of art.  The building was designed to teach, not to show. He started several very successful art classes based out of the art lousy building.  Just how much art was there? It is appraised at over $25 billion dollars worth.  And that isn’t even counting the priceless and un-appraiseable art such as Van Gogh’s “Postman”.

When Barnes died in a car accident in 1951, he made several things very clear in his will. First of all, the art was to never be removed from the walls of the Barnes Foundation. Secondly, the art must be used to educate. And most importantly, he said that the art may never be sold. He also did not want the Foundation to become a museum.

After a series of rather bad managers, the Barnes Foundation was in dire need of money.  The art was eventually sold to many of Barnes’ old nemeses.  It was sold to museums and the art was squandered to many different museums.

As of now, the city of Philadelphia has ignored Barnes’ dream to create a peaceful location to learn about Pre-modern art. The Foundation is set to move to the center of Philadelphia to become a museum. This is being done to boost the tourism of the city.

WATCH THIS MOVIE!! It is a great documentary that shows the heist of a multi-billion dollar collection of art. The more people who watch this movie the better.

Although I’ve done lots of music blogs I’ve realized I haven’t done one about an all time favorite bands of mine. Bloc Party.

Bloc Party are described as British alternative rock. Although classified as this, in my opinion the band’s music is not one specific genre. The group’s music explores different melodies and styles adding to their unique sound and on going success.

Forming in 1999 they made their break into the industry in 2003. They got their voice by throwing a demo onto the stage of Scottish band Franz Ferdinand who backed their music along with BBC Radio DJ Steve Lamacq.

In 2005 they released their first album Silent Alarm. Since then the band have progressed and grown to become a world renowned act.

After seeing them live in October 2009 the band sadly decided to take an extended break. Luckily for me I managed to see them on their sell out tour at the Brighton Centre, Brighton, witnessing an otherworldly performance.

Although the venue was full of moshing teenagers and Indie kids the concert was still amazing and these features just added to the atmosphere. Kele (lead singer) was an amazing stage presence awing the crowds with his voice and attitude.

Since taking a break Kele Okereke continued his success releasing solo album “ The Boxer” in 2010.  Other members took the opportunity to explore doing their own projects, enjoying life and having fun.

I can’t help but hope that they will once again reunite in the near future, creating more great music and filling my iPod with more of their songs.