Being a referee, I have seen many youth games as an outsider. But I also have played both club and organized soccer as a kid. Now that I see the insanity from an outside prospective, I am a little taken aback.

I think that every child should play soccer as a kid. This is an incredibly biased opinion but it does have merit. Soccer is a great sport for kids because it is simple in rules but complex in thinking. There are no plays drawn up, the player has to figure out what he or she needs to do. Soccer is also very physically demanding — a good amount of long, slow distance mixed with sprinting. For the development of kids, soccer is great.

But here is the dark side: parents. This is also biased because almost every weekend I have to deal with parents who are upset and out of control. Parents ruin soccer for kids. If the parent starts caring more about the game than his or her child, something is wrong.

Parents are their to support their kids, not to scream obscenities at the other team, the ref or another parent. I have seen many a child’s faces go a deep red when he or she hears his or her parents screaming from the sideline.

Parents should be involved with their sons and daughters soccer education. But parents need to learn to control themselves. I know that how badly they want their kid to win and to demolish the other team but can they please keep it to themselves. When they open their mouths to yell things like “Break his leg!”, “Pull her down!”, “That’s right, take that losers!”, they simply look immature.

Parents want their kids to be great and there is nothing wrong with that. But the kids will either motivate themselves to play soccer or they won’t. Chances are that the kid won’t stick with soccer if they have parents yelling at them from the sideline.

So parents take my advice: Encourage your kids, support their team. But please calm down and let the kids play. After all, its youth soccer.

As you can tell by my all caps, exclamation marked title, I am a very happy, excited girl!

Last Friday, I organized a meeting for those interested in Relay for Life. An amazing 25 people showed up, almost a quarter of our small school‘s population. Yesterday, I announced that our school’s team has been made a Relay for Life website. A goal had been set for $500 to be raised by May 15. However, an overwhelming wave of happiness blanketed me this morning when I checked on our team’s site.

Words can’t describe how proud I am of my friends. Giving to the community is one of the greatest, most rewarding feelings and to know that my small community on the hill is giving back to another is fantastic. I can’t wait till May 14th comes to see my friends walk around the track in the name of fighting cancer. Until that day comes, I will try my best to keep our school inspired. 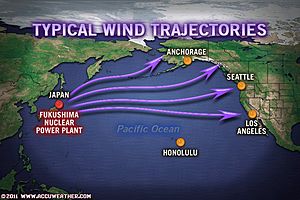 While we are playing basketball, OVS freshmen Anthony Ho said” Hey! It’s raining, so we better go back to our room, because the rain has radioactive materials in it!” People in United States, especially in the west coast are aware of the radiation which leaks from the Fukushima Daiichi nuclear plant in Japan.

However, Nolan Hertel, nuclear engineering researcher at Georgia Institute of Technology, said the United States is thousands of miles from the leaks and once the radiation gets into the air, it disperses and dilutes as the wind blows it.

END_OF_DOCUMENT_TOKEN_TO_BE_REPLACED

We didn’t know each other for very long. It was only recently that I got to experience the joy of being in your company. Every time we met you greeted me with a tight hug and a kiss on the cheek. You were always so loving. It didn’t matter who I was or who anybody was for that matter, you loved them and welcomed them into your home. Your humor made everyone smile. Your children loved you dearly. Spending time with you and Uncle Nick showed me what having a big family was like and I loved it.

And who can forget your cooking? Soul food! Talk about your typical black family, getting together after months and sometimes years of not seeing each other and enjoying yummy food and family time. Delicious collard greens, mouthwatering macaroni, Dominoes and cigars in the back yard, Al Green playing on the stereo. Even after such a long period of being apart it was like we had never left. You brought the family together. You raised the family. It’s true I wasn’t there for most the family’s relationship, but since the few times that we have met, I’ve come to the conclusion that you are most definitely very important to me. I didn’t realize how much losing you would make me cry. We didn’t see it coming, or at least I didn’t. So, I guess my point is, if you are in Heaven or Paradise or wherever else we go when we die, know that I am sending you my love and prayers every day. If only we could have just one more day to spend together. The last family gathering. But, you are supposed to be there aren’t you? Love you Aunt Lela.

A tsunami swallowed the East Coast of Japan. Radiation penetrated through construction, livestock, plants, and the citizens. Earthquake of the magnitude 9.0 shook the cities with absolute terror.

And, what did Microsoft do?

The company slyly attempted to take an advantage of this ongoing adversity.

In the midst of such suffering, Microsoft wanted to be the parasite of the suffering victims.

Discredited by a huge crowd for its vicious attempt to market Bing, the Microsoft retweeted, “We apologize the tweet was negatively perceived. Intent was to provide an easy way for people to help Japan. We have donated $100K.”

A round of applause for Microsoft’s generous offer, Please.

Let me rephrase — I did not mean “generous,”but “Heartless.”

Irony could never be sweeter.

If you are not up-to-date with the latest TMZ headlines, I would like to take this time to inform you of the recent case in which Bruno Mars and Paris Hilton are being persecuted for the possession of Coke. And no, I am not talking about the old fashioned, forever popular soda pop, but rather an extremely illegal drug substance.

However, the Las Vegas deputy district attorney who is currently attempting to charge these two acclaimed figures of fame has recently been caught with his own possession of illegal substances. And it just so happened that it was cocaine.

I honestly don’t think we can hear any more about the current Charlie Sheen fiasco.

Personally, I love the show “Two And A Half Men” in which Sheen is displayed as a humorous middle aged bachelor. And must admit that the cancellation of this beloved show did make me somewhat annoyed.

However, despite Sheen’s recent public outbursts which have called psychologists into question, the FOX Network is still very much interested in possible projects for Sheen.

TMZ has confirmed that Sheen was spotted holding a secret meeting with the top executives at the FOX network.  Charlie reportedly sat down with President of Alternative Entertainment for FOX, Mike Darnell last Thursday. Throughout the meeting, the discussion was filled with brainstorming but apparently no idea has been confirmed. However, a possible late night talk show was introduced into the conversation.

I guess audiences will just have to wait and see what Sheen does next.