I have seen some absolutely bizarre things in the world of football but this may take the cake.

Dutch club VVV Venlo announced that it has signed an 18 month-old boy by the name of Baerke van der Meij. Yes I did say 18 months, that is not a joke.

I have heard of clubs signing 11 year olds and I was shocked by that, but a toddler? It seems that it is a joke.

Quite possibly it is just a publicity stunt. Venlo is not paying the kids family much money but it gets the team’s name out in to the football media.

VVV Venlo’s basis for signing the youngster (and I MEAN youngster) was off a youtube video that shows the little Dutchman kicking balls in to his toy chest. I am not sure this is the most conventional of signing techniques but only time will tell. 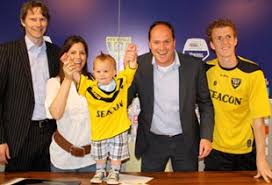 Meij was signed to a 10 year contract, which in most cases is a very long contract. However this one only keeps him until he is 11.

I still can’t get over getting on Soccernet in the morning and reading this (full article in link), “Van der Meij, 1, has been signed up by his local side on a symbolic ten-year professional contract but despite the club currently battling against relegation from Dutch football’s top-tier, it’s not thought he will be thrown into the action any time soon.”

Obviously Soccernet thinks it is somewhat of a joke as well. The caption under the photo reads, “Baerke van der Meij celebrated signing his ten-year contract with a glass of orange juice.”

I hope Meij the best of luck!